When I was a little kid, I had a belief that I suspect a lot of other children shared: things that looked pretty tasted better. A cake with fancy frosting decorations, a candy with bright colors, a sundae artfully topped in whipped cream and sprinkles, it all seemed to back this up, right?

As an adult, I’ve found even gloppy brown soups can be delicious, but that love of beauty on my plate still continues and I know my children still have that little kid fascination with pretty food. But considering how fast they gobble things down and how busy I am as a mother, it’s hard to make every meal a visual feast!

That’s why I absolutely love making these American flag themed Rice Krispie treats for the Fourth of July. Rice Krispie treats are incredibly easy, while also being very satisfying to a child’s sweet tooth. Making them red white and blue adds a little extra work, but they’re so simple to start with that it’s no great trial. 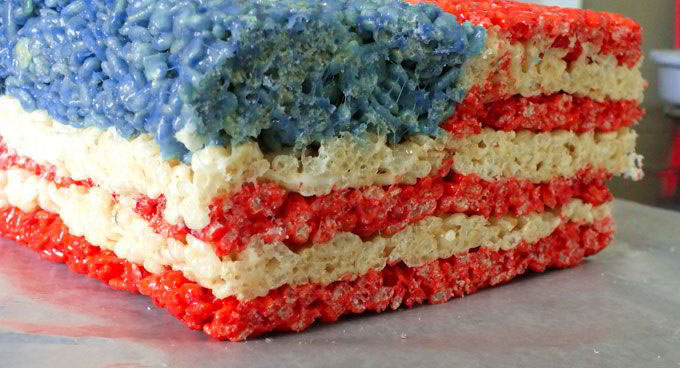 To start out with, this really isn’t that different from your standard recipe for Rise Krispie treats. You’ll begin with two batches of Rice Krispie treats, using 5 tbsp. butter, 5 cups marshmallows, and 5 cups cereal for each batch. Melt the butter in a pan over medium heat, then add the marshmallows and stir constantly until they’re completely melted, watching them so you don’t let them boil or burn. Once they’re entirely melted, remove the pan from the heat and add your red food coloring. Keep dropping in food coloring and stirring until you’re satisfied with the color, then add the Rice Krispies.

Then you’re going to press the Rice Krispie mixture into a waxpaper lined cookie sheet–both of your cookie sheets should be identical in size–in a thin layer. Use a second piece of waxpaper to press it down, so it doesn’t stick to your fingers. Once that’s done, repeat the whole process a second time without adding any food coloring. Let them set for about 15-30 minutes.

Once they’re set, you’ll slice the red and white both into three equal pieces, for your stripes in the American flag. You can slice a piece of your waxpaper into a guide, to ensure the stripes are all the exact same size. Lay down a red layer, then a white, then a second red, and another white, as the base of your flag. At this point, you’ll cut your remaining piece of each color in half and lay down one red layer, one white layer, and a final red layer on one side, as the red and white stripes alongside the blue portion of the American flag.

That final piece of white you have left over can be cut using cookie cutters for stars or other designs, or you can do what I do: eat it while preparing everything else, as part of the Chef Tax. 😉

Now it’s time to make a THIRD batch of Rice Krispie treats. It’s just like the you did the red ones, except this time you’ll be using 3 tbsp butter, 3 cups mini marshmallows, 3 cups Rice Krispie Treats and blue food coloring. Easy-peasy, right? Waxpaper isn’t good enough for this batch, though. Let it cool for a few minutes on a cookie sheet until it’s just cool enough to handle, then butter your fingers up real good to prevent sticking and mold it into shape to fit the remaining gap.

Once that’s done, pop it in the fridge for about ten more minutes to let your American flag Rise Krispie treat block firm up nicely, then slice it into half-inch thick flags and arrange on a plate with the stars you made or other festive Fourth of July treats. Enjoy!