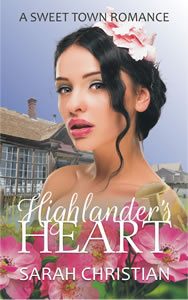 One mail-order bride was as good as another, wasn’t she? That was what Ivy Moreau tried convincing herself after her twin sister Lily ran off with an actor, leaving Ivy with a failing farm and a marriage proposal in a letter meant for Lily. She wed the gruff, wealthy Scotsman who’d sent for her sister the day she met him, determined to make the best of it.

Stuart MacGregor wanted a woman to get him through the long and lonely Dakota Territory winter, far from his family in the highlands of Scotland. The woman he got turned out to be a better fit than the one he’d sent for, so he hadn’t any complaints. Not until Lily herself showed up in dire straits, seeking help from Ivy and Stuart.

With an offer on his mine that could change Sweet Town forever, a sister-in-law making outrageous demands of him was the last thing he needed. Will Lily drive Stuart and his bride apart, or might Ivy keep her highlander’s heart?